Groupon fired up Zendesk Support to save money and support the explosive growth of their global business. 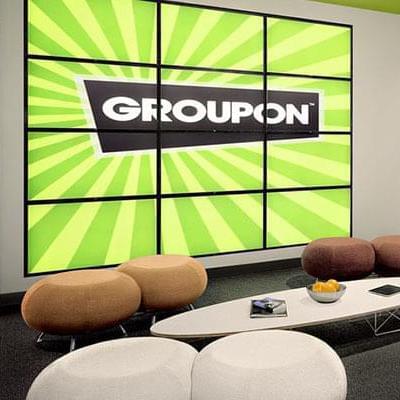 “Right off the bat, Zendesk Support was intuitive to use. It seemed more powerful and robust than other online support solutions, and it had been rated very highly in reviews.”

Director of Customer Service at Groupon

“Zendesk Support’s macros are incredibly easy to use and customize. We know how well they’re working whenever a customer writes back to us and says, ‘It’s so nice to deal with a human rather than a robot!'”

Director of Customer Service at Groupon

Launched in November 2008, Groupon features a daily deal on the best stuff to do, see, eat and buy in more than 500 markets and 40 countries. The company has thousands of employees spread across its Chicago and Palo Alto offices, and regional offices in Europe, Latin America, Asia, and Africa.

Thousands of websites offer consumers big discounts on everyday purchases. Groupon’s founders set out to do something different: help customers have satisfying new experiences while saving money in the process.

“Trust is the key to everything we do,” explained Joe Harrow, Director of Customer Service. “Our customers need constant reassurance that we’re looking out for their best interests.”

“Within a few months of our founding, our customer base exploded,” Harrow said. “At first, I was spending 10 percent of my time responding to customer requests. It gradually became a job for several agents. We realized we simply couldn’t go on without a real ticketing solution.”

“The enterprise-level solutions seemed complicated and difficult to set up,” Harrow recalled. “They would have increased our efficiency, but at the cost of hampering the customer experience.”

Harrow then searched the web for online support software and found Zendesk Support. After a quick evaluation, Harrow knew he had the right solution.

“Right off the bat, Zendesk Support was intuitive to use,” Harrow said. “It seemed more powerful and robust than other online support solutions, and it had been rated very highly in reviews. Plus, we knew that because it was a web-based solution, it could easily scale to support our increasing volume.”

“We expect our customer service agents to be able to resolve most issues on the first contact,” Harrow shared. “One of our most effective forms of training is to have agents read all our macros and know exactly when to use each one.”

At the same time, Groupon urges its agents to get personal. By training agents to tweak macros to each situation, Groupon has succeeded in making customers feel that they have been heard.

“Zendesk Support’s macros are incredibly easy to use and customize,” Harrow said. “We know how well they’re working whenever a customer writes back to us and says, ‘It’s so nice to deal with a human rather than a robot!'”

Groupon has also found it easy to integrate Support with other solutions, extending and enhancing its reporting well beyond the limits of its old spreadsheets.

As Groupon continues to grow, the company will rely on Support’s flexibility as it strives to keep customers happy.

“With Zendesk Support, we can easily tweak the system without calling a consultant,” Harrow said. We can deploy it to new departments simply by flipping a switch. And Zendesk is always adding new features.”