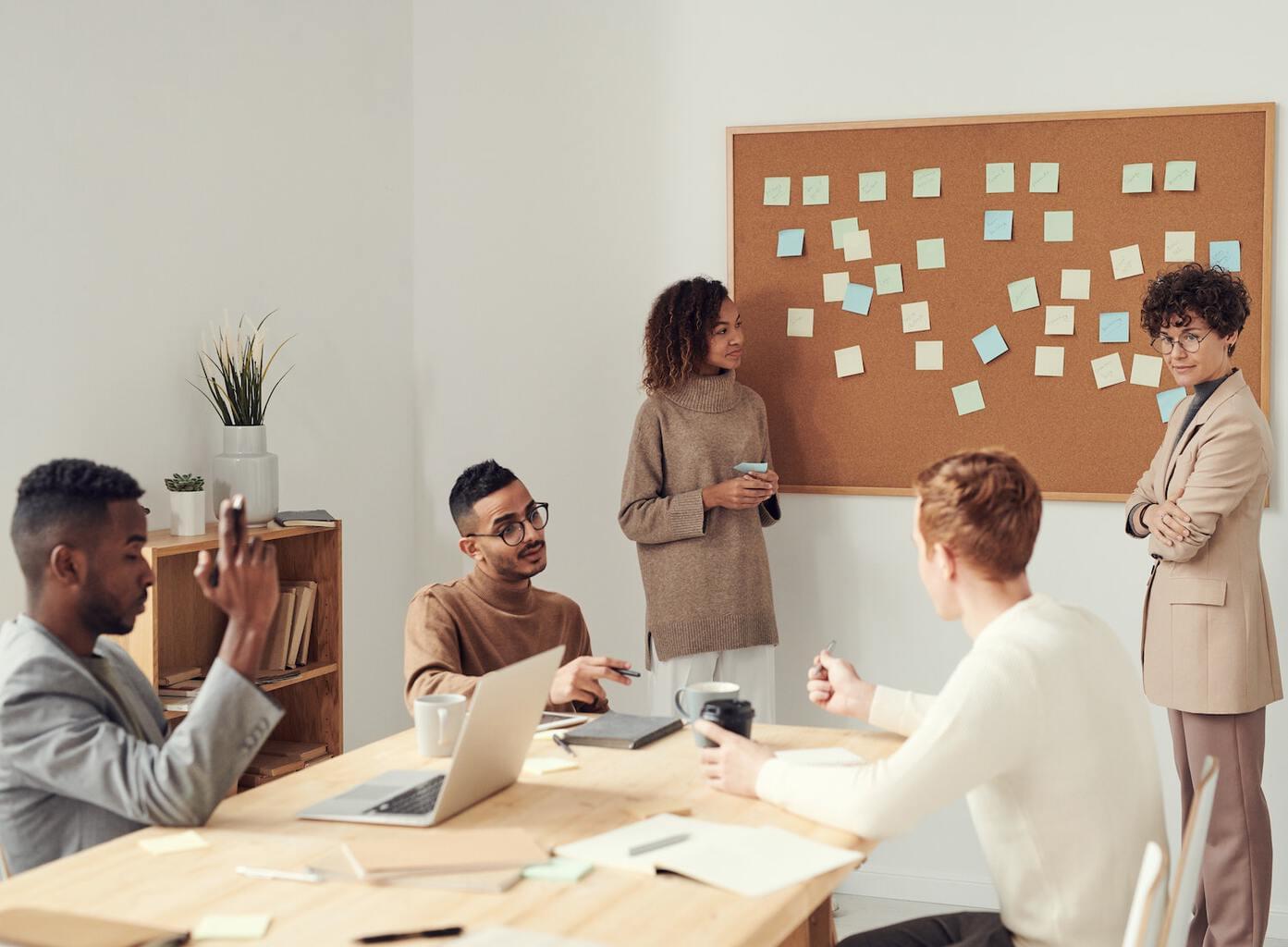 As our nation struggles with and rallies around a re-awakening of racial injustice that has been under our noses for generations, corporate leaders should be taking stock of what’s happening in their workplaces.

According to a survey conducted by a research group at the Center for Talent Innovation (CTI), 58 percent of Black professionals have experienced racial prejudice at work—a higher percentage than any other racial or ethnic group surveyed.

Black adults represent 12 percent of the workforce and hold only 8 percent of professional jobs and 3.2 percent of executive or senior-level management positions. In fact, on the 2020 list of Fortune 500 companies, there are only four Black CEOs.

Clearly, there is a divide between the experiences of white people and people of color at work.

58 percent of Black professionals have experienced racial prejudice at work—a higher percentage than any other racial or ethnic group surveyed.

Pooja Jain-Link, an executive vice-president at CTI, says their extensive research demonstrates time and time again the barriers that Black people consistently run up against.

“[People of Color] report not being heard and recognized, they experience bias and microaggressions, they lack support and access to networks. In general, People of Color don’t feel welcome and included [at work],” she said.

Some of the key findings of “Being Black in Corporate America,” the CTI report sponsored by Johnson & Johnson, KPMG, Morgan Stanley, and other corporations, are stark:

Compounding the conditions under which Black people labor is the lack of recognition of these barriers from their white leaders. “While Black employees say Black professionals have to work harder to advance, fewer than one in five white professionals agree with that idea. So there is a huge gap in perception of what Black people experience and what their white colleagues perceive,” said Jain-Link.

“CTI has done a lot of research on sponsorship, one of the key levers to leadership. Over 70 percent of leaders say they sponsor people who remind them of themselves, so it’s not surprising that white employees are 63 percent more likely to be sponsored than people of color. They just don’t get the same support and advocacy as white people do.”

“While Black employees say Black professionals have to work harder to advance, fewer than one in five white professionals agree with that idea. So there is a huge gap in perception of what Black people experience and what their white colleagues perceive.” – Pooja Jain-Link

Jain-Link co-leads CTI’s research and advisory service arms that conduct ‘culture audits’ for large organizations to help them better understand the experience for all of their employees and develop meaningful diversity, equity & inclusion (DE&I) strategies.

The results are eye-opening, she says. “We often initially get some pushback from leadership, who acknowledge what’s happening nationally [in terms of racism], but they don’t believe it’s happening at their company.”

As part of making meaningful changes based on the audit findings, many organizations engage CTI to provide training on inclusive leadership, among other important topics. “Research from a few years back looked at the power of inclusive leaders. Inclusive leader behaviors effectively ‘unlock’ the innovative potential of an inherently diverse workforce,” said Jain-Link.

[Related read: Values with action: how Zendesk will continue to do better]

6 behaviors of an inclusive leader

1. Ensure everyone speaks up and gets heard
A lot of leaders say they listen to everyone and are open to ideas, but do you actively solicit them? From everyone? Some of the most astute members of your workforce may be introverted, less confident or struggle with English as a Second Language (ESL), challenges that may make them less likely to share ideas in a group setting.

“Ask people directly for ideas in meetings or approach them afterwards to ensure that what they think is also considered. Inclusive leaders make sure that ‘quieter’ voices are equally contributing,” said Jain-Link.

2. Make it safe to propose risky ideas
When an out-of-the-box idea is put on the table by a person of color, what’s the response? If it’s immediately shut down, laughed at or ignored, an inclusive leader will reflect on whether it would have gotten the same response if it had come from someone who is part of the majority culture. Is there a sense of continuing with tradition or an openness to growth and novelty?

“Our CEO at CTI always says feel free to push back on me twice. You can put an idea on the table and if she says no the first time, she wants you to push back again if you believe in it. She’s willing to hear it again and reconsider. I love that rule,” said Jain-Link.

[Related read: Why being an accomplice is better than being an ally]

3. Empower team members to make decisions
Rather than micromanaging, inclusive leaders enable team members to know they can go forth and act on their own judgment rather than checking in on every last decision.

This may require a leap of faith that is initially uncomfortable for some leaders, but empowering employees to take control of the work they do can result in innovations that wouldn’t otherwise happen.

4. Take advice and implement feedback
Inclusive leaders foster a culture of two-way communication. When employees feel encouraged to offer feedback to their leaders, there is a sense of “we’re all in this together” rather than a top-down hierarchy.

You may not like every piece of feedback, but it’s important to consider it—especially the kind of advice you may instinctively resist. Reflect on where it’s coming from, why the employee chose to bring it to your attention, and then ask questions to learn more about the root of what they’re sharing. Ideally, you’ll make a change that addresses their concern.

Empowering employees to take control of the work they do can result in innovations that wouldn’t otherwise happen.

5. Give actionable feedback
It’s not enough to say, “Well done, team!” over your shoulder as you head back to your office. An inclusive leader is someone who takes time to consider the intricacies of what went into an employee’s performance.

Whether you’re providing kudos or critiques, it’s important to be specific. “Your sales report this month was missing a key section. Next month I’d like to see more data. Show the numbers that form the basis of your projections. Detail the research that brings you to your conclusions. Please let me know if you need support or would like to see an example.”

[Related read: Leading with empathy: What you don’t say is just as important as what you do]

6. Share credit for team success
It may feel like a no-brainer for most leaders, but some struggle with spreading the accolades. This is not acceptable in 2020. In fact, hoarding credit for great teamwork is often perceived by employees as toxic leadership.

Inclusive leaders set up frameworks for sharing credit. That may mean a systematic approach to public recognition, team celebrations, or even merit awards within an organization. When every member of a team feels like their contributions are acknowledged, it goes a long way to feeling supported, motivated, and welcome.

“If DE&I is considered a business priority, it should affect the bottom line.” – Pooja Jain-Link

The work is just beginning

While we hope to see systemic change as a result of united voices across the country, in time the firestorm of racial divide will wane, as most political movements do. At work, Jain-Link says the most important things leaders can do to keep DE&I on the table is to ensure managers stay accountable. “Implement scorecards and metrics, including DE&I goals as part of performance reviews, and have it impact the pay of leaders and managers. If DE&I is considered a business priority, it should affect the bottom line.”

Be more intentional about considering your colleagues and encourage your team members to build relationships, sponsor people in positions below them, open career doors for others, and give stretch opportunities to people who don’t necessarily look like you.

It’s up to all of us to create the conditions for success that everyone can enjoy equally.

Here at Zendesk, we acknowledge that we also have work to do. Read more about our values, shortcomings, and the actions we’re taking now.