Fast-growing Homebridge credits much of its success to superior customer service, powered by Zendesk. As the company more than tripled in size, agents had the tools to work more efficiently and provide better customer experiences, which helped turn support into a revenue-generating center. 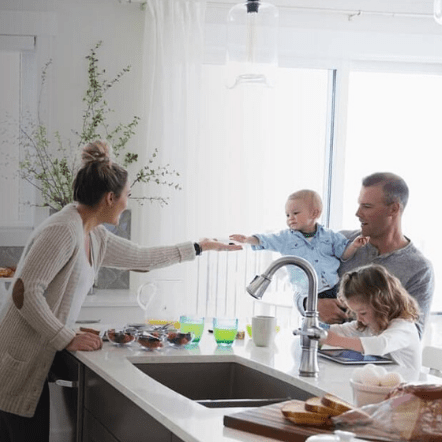 "Having all the customer data in a single place helps us to achieve a high and consistent level of customer satisfaction...We can collaborate better, and we have the visibility to see and report on everything. Zendesk also improves security by allowing us to control access to sensitive content."

“People kept using it, and kept giving raving, positive reviews—everyone from the account executives, brokers, and the B2B partners that they supported...It was a good fit, so we started bringing in other groups to Zendesk.”

You’ve found your dream home, and it has everything you want: abundant natural light, great schools nearby, and the requisite number of bathrooms to keep everyone in the family happy. But long before you collect the keys and book a moving truck—or even submit a bid—you need to have a mortgage in place. Securing that alone can be a stressful experience, as countless homeowners have discovered over the years.

Yet with the right mortgage partner, homeowners can walk away feeling supported, informed, and confident—exactly the feelings that Homebridge wants its clients to have. Customer service is key to the company’s efforts to be a trusted lender and to ensure that clients get the right loans.

“The more successful we are in keeping customers happy, the more likely they are to get an additional mortgage, refinance their mortgage, or recommend us maybe to a friend or a family member,” said Ben Chapman, director of client-facing experience and analytics at Homebridge. “The key is ensuring that customers get the best possible service, and the only way to really do that is to have a good system like Zendesk in place so that we can respond to customer requests and issues faster, and use the reporting tools to ensure that we’re actually delivering.”

Chapman has been with Homebridge since 2012, when the company first adopted Zendesk, which means he’s been in the trenches as the company expanded its use. Zendesk is now used to support 10 departments across 2 of its 3 core brands: Homebridge Retail (B2C retail lending), and REMN Wholesale (B2B wholesale lending). And as Homebridge has tripled in size over the past six years, it has leaned on Zendesk to help its teams scale and collaborate more effectively.

Before turning to Zendesk, Homebridge tried to manage customer service via email, which proved to be woefully inadequate for the mortgage process, which by nature requires tracking conversations, documents sent and received, and input from underwriters. Chapman saw firsthand how Zendesk transformed a convoluted process with low visibility into something much more intuitive.

“Everyone was using group email boxes in Outlook, and they were like, ‘There’s gotta be a better way. It’s madness,’” Chapman explained. “They didn’t know who was looking at what, who had processed what. So, I’d go in, evaluate every single thing they were doing, and I’d build out a Zendesk instance. Once they had Zendesk, it was like a dream. All of a sudden, they were able to see everything they needed and began to bang through these tasks which, as a result, meant better customer service.”

As Chapman brought in Homebridge teams one-by-one, word about Zendesk began to spread through the company. “People kept using it, and kept giving raving, positive reviews—everyone from the account executives, brokers, and the B2B partners that they supported,” Chapman said. “It was a good fit, so we started bringing in other groups to Zendesk.”

Now Homebridge’s Marketing, HR, Compliance, Operations and Customer Success departments across their brands use Zendesk Support, Guide, and Chat to process customer service requests via phone, email, chat, and to offer self-service. Even the human resources department has begun using the platform, Chapman said. “The more groups that use Zendesk at Homebridge and REMN Wholesale, the more people like it and want it for themselves. It’s selling itself throughout the company.”

Proactive chats initiated by agents help to decrease the bounce rate of site visitors. The customer service team reaches out to visitors and asks them to fill out a simple form. In this way, agents are garnering valuable sales leads and helping accelerate the loans process.

Achieving a high and consistent level of customer satisfaction requires having all customer information located in a single place, which the company has with Zendesk, Chapman said. The system has also improved Homebridge’s operations by providing better visibility and security. “We’re able to see everything, we’re able to report on everything,” Chapman said. “We’re able to stitch internal and external communications together so we can collaborate better. And custom roles gives us the ability to control access to sensitive content.”

That visibility helps REMN Wholesale, for example, improve its rate of getting loans closed. Being able to reduce how long customers have to wait for mortgage approval helps set the company apart from other lenders.

“Zendesk is a key contributor and an asset to ensuring that the wholesale business can maintain that speed,” Chapman explained. “Not only through improvements in workflow, triaging, and service, but also in managing all the data that needs to be passed back and forth between customers and the teams processing these loans. Zendesk Explore helps us monitor and analyze where there might be gaps, where employees might be lagging behind for one reason or another so we can improve performance.”

As Homebridge has grown, Zendesk has helped the company handle new challenges, such as replacing upgrading from Zendesk’s legacy hub-and-spoke system for its brand websites. When Zendesk unveiled its Multibrand feature in 2015, Homebridge decided to make the transition, which meant tapping Zendesk’s Professional Services team to migrate thousands of tickets. That helped Homebridge avoid a potentially messy process while enabling agents to hit the ground running, Chapman said. “We now have more capabilities and ticket sharing between teams in each brand is much easier.”

Homebridge also integrates Zendesk with TrustPilot, an open-review platform designed to elicit customer feedback while discouraging fraudulent reviews. This integration has helped agents stay on top of customer feedback, which helps the company identify internal problems while giving those customers the knowledge that they’re being heard.

“Integrations with TrustPilot, Zapier, and Facebook, allow us to see and interact with customers and manage relationships that we haven’t started yet or that we want to retain,” Chapman said. “It helps us maintain relationships with the customers we already have, and the ones we want to grow.”