Learn how the support team at InVision leverages the Zendesk API and Apps framework to create custom solutions that not only increase ease and efficiency, but help them achieve nearly-perfect customer satisfaction. 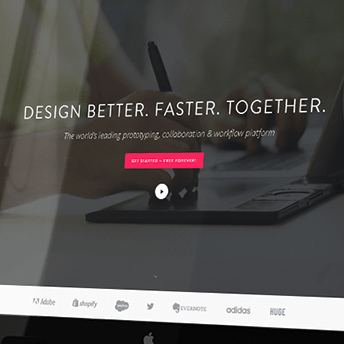 “Being able to build integrations quickly and easily—and having a very robust API that can perform almost every function that’s available in the product—makes it really easy to integrate in and build customizations.”

Among leaders of customer service organizations, Brandon Wolf holds no uncertain bragging rights. For the past four years, the vice president of customer support for InVision has reported customer satisfaction rates north of 97 percent even as InVision has grown to support more than five million users. “The rates are usually bouncing between 98 and 99 percent,” he said.

The numbers are astounding, not only because they are so high, but because InVision offers robust software as a service. The first ever all-in-one product design platform, InVision makes it easy for engineering and business stakeholders at companies such as Amazon, HBO, Capital One, and Kayak to collaborate during their design process. Like any SaaS product, things don’t always work perfectly. But the inevitable hiccups aren’t reflected in the customer satisfaction scores.

InVision’s customers don’t limit themselves to expressing their appreciation for the support team by voting thumbs up or thumbs down on the follow-up survey. “Your support so far has proved to be the best I have ever encountered when using a tech product or service,” one customer said.

“The support team at InVision was responsive and solved my problem quickly and politely,” wrote another. “Thank you for getting customer service right.”

Wolf attributes such sentiments to the professionalism of his 78-person team and the tools they use. Wolf, who joined InVision in the spring of 2014, switched the company’s customer service software from Help Scout to Zendesk Support at the beginning of 2015. InVision was growing fast, and so was the number of tickets in the support queue. Wolf wanted a tool that could be configured to support the needs of a larger team.

“Our old platform didn’t offer voice or chat support and didn’t make it terribly easy to build integrations with all of the other existing tools—Salesforce, JIRA, and other tools that the company was using on a daily basis,” Wolf said. In search of better functionality, the team had begun adding tools, for a total of seven, fragmenting information and functionality in the process. “I wanted to roll the entirety of the support team’s tooling into one platform that was easy to work with so that we could confidently and quickly support customers all in one place,” Wolf said.

Wolf looked at other products, but ended up choosing Support primarily because of its extensibility and built-in integrations. “The Zendesk App Framework is Zendesk’s silver bullet—it’s true differentiator,” Wolf said.

Wolf is also a fan of the Web Widget, which InVision rolled out in the spring of 2015. The widget shows up whenever users are logged in, as well as on the company’s public-facing help center, providing a quick and low-friction way for customers to give feedback about InVision and get help if they need it. “I want every customer to feel like support is just an extension of the product, rather than some alien land, and this was the fastest way for us to follow through on that vision,” Wolf said. “Plus, we were able to use part of the widget API to autofill the name and email address, making it even lower friction for our users to reach out to us. Both our users and our team have fully embraced it.”

The team took its time over a two-week period to make the switch from Help Scout to Support. It took just one afternoon to write a script to migrate all the customer interactions that were stored in the legacy tool, plus a bit of testing beyond that to ensure faithful data transfer. “Moving to Zendesk Support was easy,” he said. “We did not have to engage the technical support or services teams.”

With Support, it’s easy for the support team to hand off, collaborate, and escalate customer requests without taking any extra steps or leaving the platform. That means quicker resolutions: today, the median effort to solve a Tier 1 level support ticket is just over five minutes.

“It was very gratifying to switch to the new platform and be able to back up the decision with these kinds of numbers,” Wolf said. “It’s something that I’m very proud of.”

For InVision Senior Director of Support Sean Kinney, Guide Enterprise, along with the Support API and Apps framework, have been especially important in the company’s drive to provide its customers with the best support possible.

With the Zendesk Support API, said Kinney, “being able to build integrations quickly and easily, and having a very robust API that can perform almost every function that’s available in the product, makes it really easy to integrate in and build customizations.” The Apps framework is also very easy to use to solve problems, he said. “It makes it easy to tailor Zendesk for our particular business needs and adapt it for our processes, and to make it more efficient for our staff to do things that they’re having to do over and over again.”

Kinney also noted that Zendesk’s problem and incident ticketing feature enables InVision to track every bug and feature request its customers encounter; problem tickets are kept in sync with the associated Jira issues via the Zendesk JIRA integration so that the support and engineering teams can work in their tool of choice while accessing the same data. InVision’s support group also escalates tickets via Zendesk to the company’s finance, security, and legal departments.

To a company that boasts users from thousands of companies around the world and a support organization with 78 agents to respond to tickets, reducing response time and work is critical, as is having up-to-date, easy-to-find support content. The company also has completely eschewed the traditional office environment, instead hiring staff in widespread locations and giving them the tools and support they need to work efficiently and responsively from home offices, cafes, or wherever they prefer to locate themselves. That makes it especially important to have powerful, extensible tools for knowledge management and collaboration as service agents respond to customer requests arriving via email, phone, Facebook Messenger, Twitter, and InVision’s self-service knowledge base.

InVision’s knowledge base serves both internal users and external customers and places strong emphasis on training and onboarding. “The biggest thing is trying to reduce the cost of providing support,” Kinney said. “The hope is that we can deflect customers to our self-service content, and reserve our staff for handling issues that really require their attention. Documentation is the first prong of that approach. We need good self-service documentation for that to be viable.”

InVision’s support team also sees value in working with other teams in the company to create one consolidated knowledge base; to that end, it is working with its peers to move internal knowledge from team-collaboration tool Confluence, the Guru knowledge management tool, and other Google microsites. Flexible Hierarchies in Guide Enterprise allow InVision to create robust categories, sections, and subsections, and are “a huge game changer,” said Kinney. “It unlocks the ability to organize the content a lot more along the lines of how our customers would access it,” he said. “That was a big one for us. It lets us go much more granular. We’re also really excited about the ability to do approvals and the ability to do periodic rolling audits” to ensure the content stays up to date.

The consolidation of the team’s internal knowledge base and external help center creates one space for customers to learn how the product works, and for support agents to assist those customers when they have questions. InVision took advantage of Guide’s theme templates to visually differentiate internal and external content. “We bifurcate our content into two main groups,” said Kinney. “We’ve got our Getting Started content, where we walk a customer through content modules, and our knowledge base, which is full of individual articles. The multiple-templates option makes it really easy to have a discrete, unique experience in each section.”

InVision leverages Zendesk’s GitHub integration to bring the content in for the various templates, which also made it possible for the support tools team to update that content quickly and easily. “The new GitHub integration works really well there,” said Kinney. “They can just push the code on their end, and then I can go in and just pull all the updates right from the UI. That has also been a huge help for us from an operations perspective.”

The changes to promote content, improve searchability, and organize articles more effectively have enabled InVision to increase its self-service ratio by 100 percent over the previous year. During that same period, the company saw the ratio of tickets per active product user drop from 2.9 tickets per 100 active users to 1.6 tickets per 100 active users, an 81.25 percent change. The result? InVision has avoided scaling its support team as aggressively it otherwise would have needed to, effectively eliminating the need for an additional three or four staff members per year.

Continuing to build the castle

InVision is looking to increase its success with Guide’s AI-powered Answer Bot as well. “We want to provide the best support experience we can without breaking the bank,” said Kinney. “That’s why Answer Bot is another thing we’re looking at heavily, because it helps further that. Anything we can do to deflect people to documentation as a self-service solution reduces the cost of staffing that channel and lets us focus resources on answering the more-complex questions.” Although the company only recently launched Answer Bot and is triggering it for fewer than 25 percent of tickets, it’s seeing more than 100 tickets solved via the tool each month. Kinney estimates that Answer Bot could result in savings of more than $100,000 per year.

InVision has also been using Zendesk Gather to build a community area, with the goal of fostering a place for designers to help each other with the InVision product and discuss best practices. Since launching in 2017, the community has received an average of 40 posts and 32,000 views per month, with a notable 50% spike after a redesign in May 2019. “No matter how well we document our products, there are going to be people who have questions that aren’t in the documentation, or that are written in a way that we never would think to keyword or label our content,” said Kinney.

“The customer experience we’re trying to provide is minimal friction, and reassurance,” said Kinney. “If users are having an issue, if they’re running into a bug or there is an outage, we want them to know that there’s somebody there to help them—that they’ve got a support net to help them confidently use our product.”