What can you do if your boss is a psychopath? 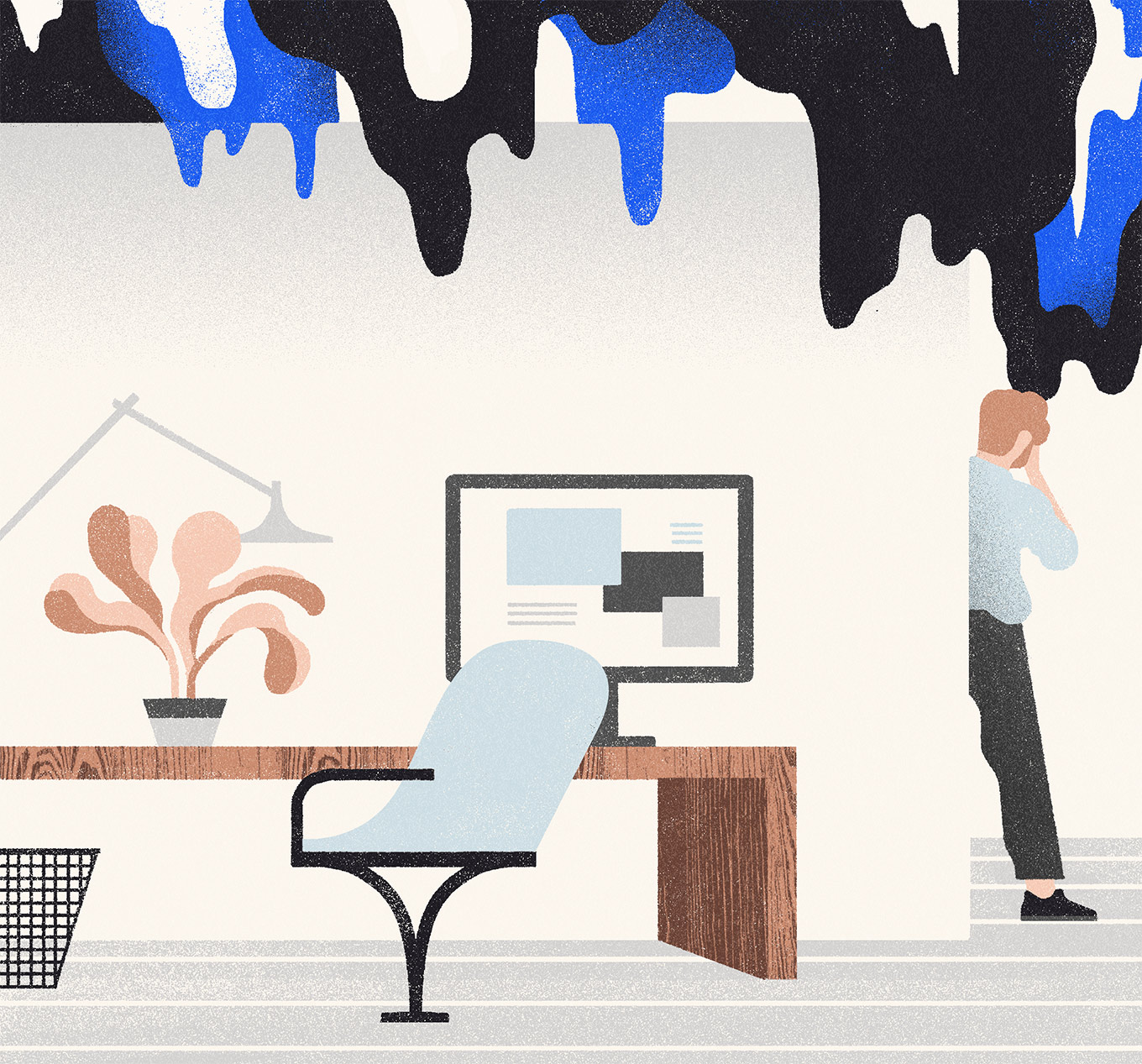 Years ago, Bridget* launched her career in publishing. Shortly after getting settled, her team underwent a change in management. Bridget’s soon-to-be manager was being transferred from another part of the company, and murmurs around the office alluded to his terrifying reputation. “It was like hearing that the apocalypse was coming into the office,” Bridget remembered. “When the announcement was made, everyone started to look for a different job.”

And the murmurs weren’t inaccurate. Mr. Boss’* behavior was abusive, to say the least. For starters, yelling was his baseline form of communication. Bridget remembers him yelling so loudly that the entire floor of the building shook—her coworkers later told her that they’d never heard someone communicate so unprofessionally in the office. As much as she tried, Bridget could rarely win with Mr. Boss. He’d change the rules and expectations without warning, and was punitive when Bridget was unaware of her new responsibilities.

As if that wasn’t enough, Bridget also received phone calls at all hours of the night. After a long day of in-office abuse, Bridget would return home to find an email tirade waiting in her inbox. “I got long nasty emails… but also cold and short ones that would leave my heart pounding out of my chest,” she said.

If her job was so awful, why didn’t she just quit? The truth is, she felt like she couldn’t. Mr. Boss constantly reminded Bridget that she was privileged to work with him; “I made you everything you are. I can make your career,” he would say.

Despite all of this horrendous behavior, Mr. Boss’ charm kept him in HR’s good graces and protected him from getting fired time and time again…

A callous lack of empathy

Fast forward 15 years to SXSW. This year, the conference hosted a clinician, a social scientist, and a venture capitalist on a panel titled, “Psychopaths in Silicon Valley: A Guide” (talk about an attention grabber). As I absorbed the stories and descriptions the panelists shared, something felt all too familiar—these people were talking about Bridget’s boss. I later met up with Bridget and ran down the list of personality traits typical of psychopaths. Her eyes lit up. “Yes,” she said. “Definitely a psychopath.”

Psychologist Dr. Michael Woodworth, one of the members on the panel, defines the personality disorder as follows: “A psychopath in his or her essence has the uncanny ability to mask, at least for a period of time, their profound lack of remorse, or a callousness to empathy.” Also known as antisocial personality disorder, psychopathy is characterized by constant lying, manipulation, shallow affect, lack of empathy, disregard for the rights of others, hostility, and the protective shield—charm.

“For those of you who think you’ve met a psychopath, you’ll recognize these traits. Most of us will lie once or twice a day, but it’s usually for a reason,” said Stanford University professor of Communication Jeff Hancock, also a panel member. “A psychopath lies only to manipulate… A psychopath lies for reasons you can’t even imagine.”

On the street, behind bars, and leading your company

The United States FBI characterizes psychopathy as the most dangerous personality disorder. And for good reason. With a complete lack of empathy, psychopaths have been known to kill others “just to see what it feels like.” Understandably, many psychopaths land themselves in prison as a result of their immoral acts. According to the National Criminal Justice Reference Service, approximately one percent of the general male population are psychopaths; however, when you get to prison this number jumps to 15 to 20 percent.

But there’s another place where psychopaths are found at a higher concentration. That place, believe it or not, is your office. According to a study conducted by Paul Babiak, Craig Neumann, and Robert Hare, 3.9 percent of corporate professionals can be characterized as psychopaths. That’s one in 25 people at your company. That’s four times as high as our population at large.

3.9 percent of corporate professionals can be characterized as psychopaths. That’s one in 25 people at your company. That’s four times as high as our population at large.

How on earth is this number so high? Are these people slipping through the cracks and up the ranks? Scary as it is, many of the personality traits characteristic of psychopaths are also traits that help people get ahead in business. Charm, self-interest, disregard for others, thrill-seeking—you need a little bit of each of these to start a company, brave the entrepreneurial battles, and climb the corporate ladder.

“A lot of the same characteristics you see in very successful CEOs—fearless dominance and boldness—are the same you see in Presidents and psychopaths,” said Dr. Michael Woodworth. “Even engaging in altruistic acts can be something you can adapt and corral, for a short period of time.”

Take the young and brilliant CEO of Theranos, Elizabeth Holmes. Holmes dropped out of Stanford in 2003 and started her own tech company, Theranos. She developed a device that could gather a massive amount of data from a single drop of blood. Sound too good to be true? In 2015, The Wall Street Journal exposed that the entire thing was a scam. As the story goes, Holmes was willing to risk people’s health (and lives) to make her company more successful. So, did her personality get her ahead in business? Yes. But did her success come at an extreme cost to others? Sounds like a lack of empathy to me.

The bad and the messy

While corporate psychopaths cause a lot of damage in their work environments, it can be hard to kick them to the curb. Instead of getting fired, they often are moved from team to team. But being transferred doesn’t fix the problem.

A close friend of mine, Alanna*, also worked for someone at a major Silicon Valley tech company who exhibited many of the traits of a psychopath. Even before becoming his employee, Alanna remembers hearing horror stories from employees on his former team. Yet, he was considered a star player and was initially a fantastic boss—outgoing and funny. “He was super super charming, especially with senior leadership.” Unfortunately, things didn’t stay pleasant for long. “He became a maniac,” she shared.

“In corporate America, if a psychopath doesn’t get their way, or if their charm stops working, they resort to the opposite direction—screaming, throwing water bottles, bullying,” said panelist Bryan Stolle, Founding Partner at Silicon Valley’s Wildcat Venture Partners. “And because they are usually the leader, the founder, they are most often protected by HR.”

“In corporate America, if a psychopath doesn’t get their way, or if their charm stops working, they resort to the opposite direction—screaming, throwing water bottles, bullying.” – Bryan Stolle

But whether or not they are covered by HR and upper-management, psychopaths come at a real cost to business. According to another study by Dr. Robert Hare and team, when someone scores high on the B-Scan 360 test, a tool used to measure psychopathy in the workplace, their colleagues are more likely to have high levels of psychological distress and low levels of job satisfaction.

What you can do about it

If this happens to you, or someone you know, leaving the company may seem like the path of least resistance. But it’s hard. Both Bridget and Alanna felt like they couldn’t leave; if they did, their bosses would somehow destroy any future career aspirations they had.

After speaking with these two women and listening to the “Psychopaths in Silicon Valley” panel, I compiled a few tactics for dealing with an abusive manager.

Set boundaries. Be very polite and firm. After Bridget received more late night phone calls than she could possibly tolerate, she talked to her boss. “I’m sorry. I know you like to communicate after 10pm, but I can’t take phone calls after 8:30. I understand if that’s not okay, and if so, we can talk about my transition.” If you can’t handle the late night phone calls, don’t; build your boundaries. Respond to your boss via email the next morning and offer to have a discussion at a more appropriate hour.

Save the tears. When your boss emotionally manipulates you, you have to try to not respond with tears or anger. “A lot of the pleasure [psychopaths] get is in the immediacy. They want to play with the mouse and torment it,” said Dr. Woodworth. If you have to cry (we’ve all been there!), save it for your car or a closed office.

Be mindful of your setting. If you’re going to have a difficult conversation, figure out where to hold it. Maybe opening the office door or having a conversation in a public space will make your boss communicate more professionally (and scream less). “Change the environment so it makes the person less likely to use their full bag of tricks,” said Bridget. “It might make you feel more grounded.”

Make yourself a paper trail. Document your interactions with your boss in real time; write everything out with dates and times. If you ever decide to report the misconduct, these records will be of the utmost importance. What’s more, try to use email and text over verbal communication. It will not only serve as record, but also give you a leg up in the conversation—text-based interaction is where psychopaths perform the worst. “All the confidence is wiped out,” said Dr. Woodworth, “and they are not very cohesive in the written channel, so it’s like a double whammy to them.”

Build out your network. “Make sure that you have a strong network in your organization so you have allies sideways and up,” recommended Alanna. “So if someone does try to destroy you, you’ve got a place to move laterally or even up.” This also gives you people to come to your defense so the horrible boss doesn’t have all the power.

Set an expiration date and cling to it. “If you value this job, take a look at yourself and what your health is looking like and figure out how long you can do it…and then get out,” said Bridget. If you look at the job and realize there’s nothing you’re going to get from it, get out now. Otherwise make an action plan and set your leave date and hold onto it—it’s your light at the end of the tunnel. Make a plan, and take care of yourself in the meantime.

There’s a better boss out there

After finally severing ties with her awful boss, Bridget found herself a better one. She doesn’t get yelled at, she isn’t manipulated, and she can walk around the office with ease. She was treated horribly, and as a result learned how to treat her mentees and employees differently—she leads with kindness instead of cruelty. “I am so happy,” she said smiling. “I won’t sacrifice my health for my skills ever again.”