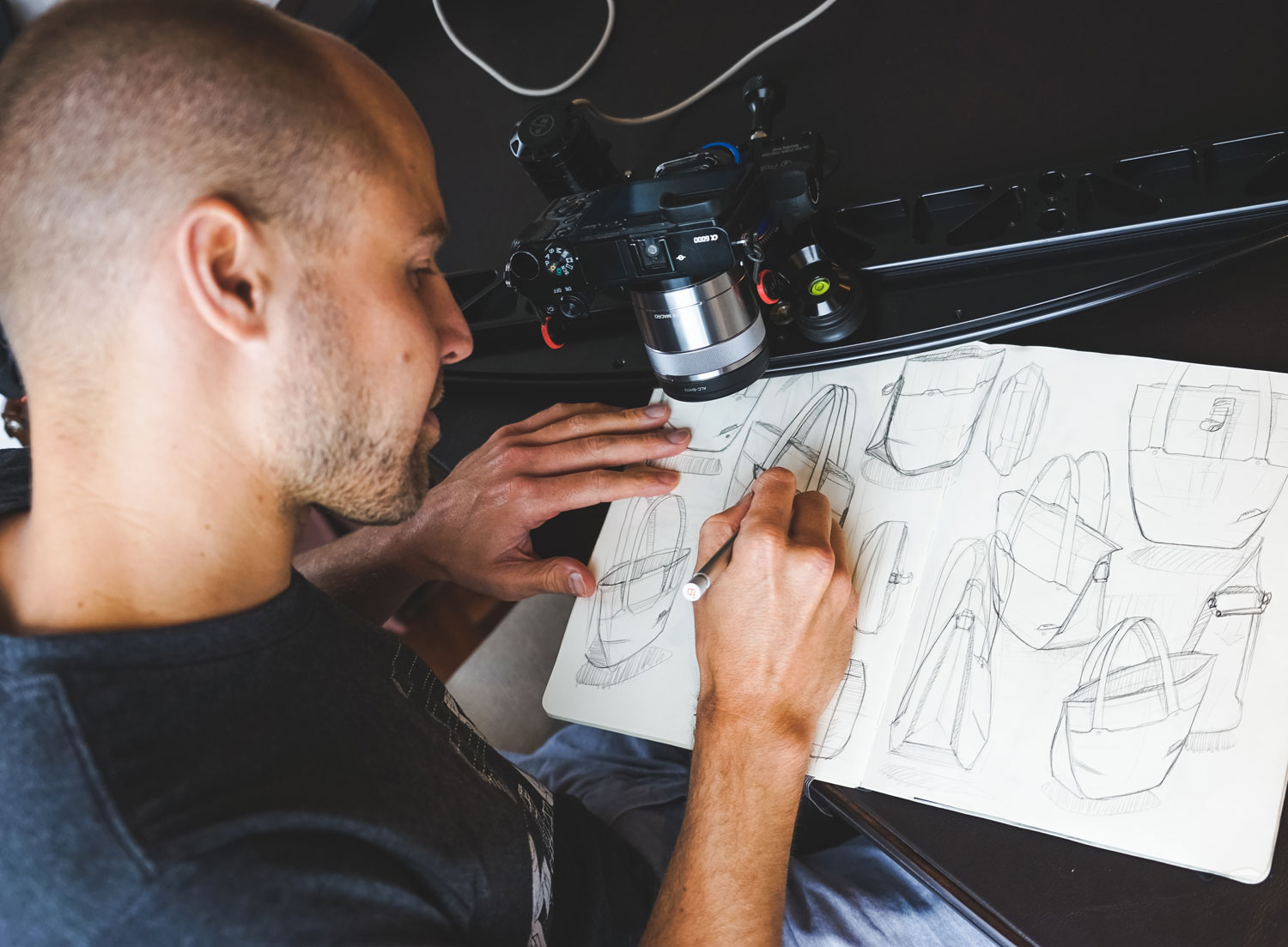 Peter Dering had to earn his eponym. His firefighter father and intrepid older brother always went by “Daring,” while he was simply Pete. That changed in 2010, when he quit his job to design Capture, a metal clip that attaches a camera to any backpack, belt, or bag—solving a pain he’d wrestled with while traveling, finding it difficult to safely and easily access and store his DSLR. Dering launched Capture on Kickstarter and Peak Design, the world’s most actively crowdfunded company, was born. That feat, Peter thinks, “totally creamed” both father and brother in earning the name.

Peak Design may be one of the smaller leaders in carry equipment, but it is certainly a crowd favorite. Since 2011, the company has raised $21M+ over the course of seven Kickstarter projects. Its most recent project, the Travel Tripod, has exceeded its funding goal by 1,300+ percent.

What’s in the company’s secret sauce?

As a self-funded, kickstarter-backed company, Peak Design treats its customers like a board of directors, keeps close tabs on feedback, and sends thoughtful replies to all inquiries. That customer feedback helps the company continue to build great products that customers both want and need.

But Peak Design has learned that growing into a successful company requires more than designing, manufacturing, and shipping great products. Dering initially started Peak Design to offer peak performance gear and has since steered the company into a vociferous leader in sustainability, but says that neither of those are the point. Growth and outstanding customer experiences also come second to what matters most. Instead, Dering says he started Peak Design to be a place where people could spend the majority of their adult lives finding true satisfaction and fulfillment. For him, the reason why Peak Design continues to exist is because working there is a satisfying way to pass the time.

Peak Design has learned that growing into a successful company requires more than designing, manufacturing, and shipping great products.

Building a company that offers fulfilling work for employees has led to enviable growth, fierce customer loyalty, and near-zero turnover.

“I would argue that everyone here feels that we have a greater obligation to society than just creating excellent products,” Annie Nyborg, Peak Design’s director of sustainability, said about the company’s employees.

When she first joined in 2015, Nyborg was squeamish about moving from the nonprofit world to a private product company. That discomfort needled at her until she circled back around to reading Let My People Go Surfing by Patagonia’s founder, Yvon Chouinard. Chouinard’s notes on his journey to build one of the world’s most environmentally admired companies inspired her to embrace a new role: Nyborg became determined to be the squeaky wheel Peak Design needed to make sustainability an integral part of its DNA.

Building a company that offers fulfilling work for employees has led to enviable growth, fierce customer loyalty, and near-zero turnover.

She started by successfully pitching Dering on joining 1% for the Planet. Then she asked the six-year-old company to take her on as its Director of Sustainability. Dering didn’t hesitate to give her the green light, and not just because it was the right thing to do for the planet. Rather, he knew that others inside the company also wanted to do more than just make great products. He saw Nyborg as capable of moving the company in a more meaningful direction that others would be excited to follow.

For Peak Design, sustainable growth also means creating sustainable jobs, something the company was unable to accomplish when it tried to build a support team at its headquarters in San Francisco, and later in Austin, Texas. In 2018, it made the decision to move its support operation to Makati in the Philippines. Dering explained that the change has been a boon to customers, the company, and the team in the Philippines–the jobs Peak Design has created in Makati allow people who are passionate about customer service to build careers and make a viable living in a way that is out of reach for Americans working in support in large cities. They’re an integral part of the Peak Design team and have enabled the company to scale while staying true to its mission of prioritizing workers’ happiness over growth.

“The reason we perform,” Dering said, “is because it’s fun. I mean, it is literally enjoyable to be good at our jobs. And the result of being good at your job is growth. Because we don’t have any investors, and Peak Design was started with a very small amount of money of my own, we have grown slowly and that has forced these deeper questions about like, ‘Well, shit, what is our impact on the world socially and environmentally?’ It has allowed me to touch on all those things that I might ruminate on if I’ve taken too many mushrooms.”

Not that embracing sustainability isn’t good for business, especially among millennials. A 2017 Nielsen report on American consumers found that 62 percent of baby boomers, 66 percent of Gen X, and 83 percent of millennials of agreed that “It is extremely or very important for companies to implement programs to improve the environment.” Millennials are especially eager to change their spending habits to align with their values: 75 percent said they would reduce/change purchase and consumption habits to decrease their environmental impact.

“The reason we perform is because it’s fun. I mean, it is literally enjoyable to be good at our jobs. And the result of being good at your job is growth.” – Peter Dering

Peak Design has been walking the talk by making sustainability a priority in four core areas: facilities, supply chains, advocacy, and, most recently, a non-profit it founded with BioLite, Climate Neutral, a B2B initiative to certify companies as climate neutral. This was inspired by the company’s own journey to offset its carbon emissions, a move that for Dering, is imperative to address climate change now.

“The most existential concern today is the amount of carbon that gets in the air. There are two measures that I think will reduce that. Number one, as a world economy, we need to shift over to deep electrification and making sure that that electricity comes from solar, and wind, and grid storage, but it’s going to take another 30 years minimum to get there. So what we do in the meantime is offset carbon emissions. That’s real, and it puts a price on carbon, and in my opinion it’s something that all businesses should be doing,” he said.

Rather than being convoluted and prohibitively expensive, Peak Design found that offsetting its carbon emissions is easy and affordable. It also makes business sense: by certifying companies as carbon neutral, Climate Neutral is building demand for products with carbon neutral certifications, similar to the organic food movement.

Radio silence: Why failing to respond will cost you credibility]

Dering, Nyborg, and Howell have all had countless interactions with customers that demonstrate that they equate the company’s environmental practices with its credibility. “We have developed a level of trust with our consumers that almost no brand has,” Nyborg said, adding that she’s encountered people that have vowed to be customers for life—even when they know the company has screwed up. “As long as you’re very transparent and customers know that you’re trying to do the right thing, they will stick with you,” she said.

“As long as you’re very transparent and customers know that you’re trying to do the right thing, they will stick with you.” – Annie Nyborg

For Howell, the company’s emphasis on sustainable practices goes back to its commitment to do right by its customers, whether that means providing a great product, offering a life-time warranty and fast, responsive support, or treating the environment with respect. “We know that trust is easily breakable. To continue to be successful, we need to be conscientious of making sure that we don’t lose it,” she said.

Tellingly, what works for earning customer trust also works for retaining talent. Ten years after its founding, Dering says that what he’s most proud of is that none of the company’s core employees have quit. Well, almost none: one early employee retired and another moved to Maine to knit. Asked where the company will be 10 or even 100 years from now, Dering hopes it’ll be an extrapolation of what it was at three employees and at its current 38: a satisfying workplace where employees thrive.