Why gendered language is everyone’s business 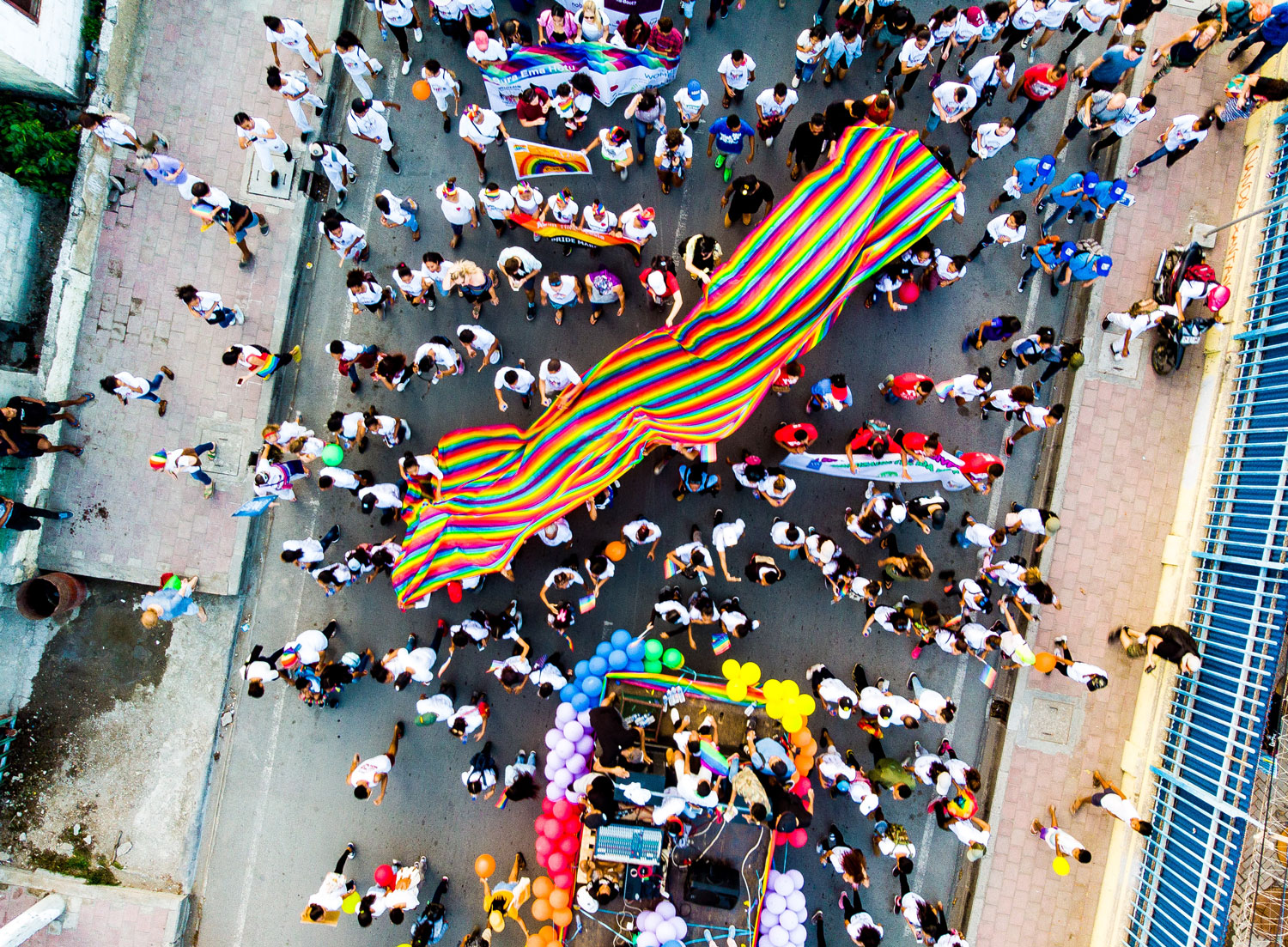 It was an upscale Indian restaurant near Central Park–”magnificent views of the park and upper Manhattan, cozy ambience, delicious food,” recalls concert pianist Sara Davis Buechner, who had taken a group of her students to dinner. All good… until the check came. “The waiter put it in front of me and announced loudly, ‘Here’s your bill, SIR.’ I was wearing a lovely purple ankle-length dress and my best new pumps.”

When the server returned the Amex slip, Buechner asked him to look as she filled it in. “I put a big zero in the space for gratuity and told him, ‘There’s your tip, MA’AM.’” She never went back. These were the early days of her gender transition, in the late 1990s. “It was just one of many favorite haunts I gave up, as a price for my life ticket.”

Maybe gendered language—pronouns like her and him and other words like guys and ma’am—is something you think about every day. Maybe it brings back a blur of high school English tests. It probably depends on if you are cisgender, meaning you identify with your birth sex, or off the binary, whether you’re trans, genderqueer, or another identity altogether.

More and more, though, as inclusivity sweeps the world, gendered language is everyone’s business. That said, it can be confusing and daunting. Read on for why it matters, examples of well-known brands that have already taken steps to adjust how they address customers or allow them to self-identify, and some easy-to-implement best practices.

More and more, though, as inclusivity sweeps the world, gendered language is everyone’s business.

Why should you care?

Critics—whether the “I’m just being a reasonable devil’s advocate” variety or the full-on keyboard-warrior trolls—like to argue that there are not enough trans people to care about or accommodate. Trans visibility has steadily increased in the past 30 years, although there is nothing new about trans people—nor is the visibility some kind of trend. It’s simply that more and more, people in general, in particular younger people, may be feeling comfortable being open with their own individual expression. A study published by the Williams Institute, a think tank on sexual orientation and gender identity law and public policy, found that 27 percent of youth ages 12 to 17 in California, or 796,000 young people, are gender-nonconforming (GNC). (This was the first time the California Health Interview Survey had included questions about gender expression among teens.) Overall, .6 percent of the U.S. population—1.4 million of 327.2 million—identifies as trans, also according to the Williams Institute, up from .3 percent five years earlier.

Why wouldn’t we, as managers, friends, and business owners, make simple shifts to include everyone? Whether we’re talking about an HR department or a major customer service operation, the reason to be inclusive with gender and pronouns is the same: It’s the right thing to do.

Whether we’re talking about an HR department or a major customer service operation, the reason to be inclusive with gender and pronouns is the same: It’s the right thing to do.

“I could go on at length about how it gives the company a better name, increases workplace cooperation, and makes customers and employees more comfortable,” says Kiernynn Grantham-Crum, a data science student at U.C. Berkeley and national youth council member at Maven Youth. But ultimately, they say, “It’s basic human decency to show respect for who someone is and to not pressure them into feeling they have to act or present a certain way.”

“The cynical answer would be something about how support for trans/GNC rights is surging, and how businesses look not just behind the times but actually cruel if they don’t get with it,” says Flourish Klink, who works in audience development for the entertainment industry in Los Angeles. “But the real answer is that it doesn’t hurt anyone to accommodate trans and GNC people, so why would you choose not to?”

[Read also: Be an #A11Y—why inclusive design is good design]

The many areas where gendered language comes up can differ by industry and locale. Even so, there are some universal snag points, particularly regarding names and titles. Many trans or gender nonconforming people use names in daily life that differ from what appears on their IDs. Or, they’ve changed their names recently, Klink points out, so even though the name is legal, sales and customer service reps might have an old name for them.

Abby and Chris, consumers who live in Madison, Wisconsin, cite customer service on the phone as a common trouble spot. “Although being ma’am’ed or sir’ed is typically seen as a form of respect, with trans and gender-non-conforming people, it can often ruin their experience as a customer,” says Chris. And it’s not just the phone. He recently got a letter in the mail from his insurance provider that used the salutation “Miss.” “It made me very angry,” he says. Chances are the company was trying to be professional, or, on the phone, establish a rapport. “You just nuked it by getting their gender wrong, and you were trying to be polite!” sighs Klink.

There are straightforward alternatives that now trump these traditional forms of courtesy: “Addressing customers using their preferred name is superimportant,” says Arli Christian, state policy director at the NCTE. Use a name instead of pronouns; the NCTE generally recommends avoiding using gendered language altogether if possible. Agents should be trained to ask questions like “Do I have your name right?” or “Am I speaking with so-and-so? Do you have a name that you would prefer that I refer to you as over the course of this phone call?” In a waiting room, says Christian, call out customers or patients by last name. On a form, indicate when a legal name is necessary and when it’s OK to use a nickname.

One of the simplest ways for business to be inclusive, says Klink, is to look at lead generation and customer service contact forms from a trans and gender-nonconforming perspective. Do they communicate how a person who fills them out wants to be addressed? You can separate a legal name from what someone wants to be called, or add text that reads “It can be a nickname!” below your name field, Klink suggests. “Instead of worrying about honorifics, let people pick their pronoun. A dropdown that says ‘Are you a… She, He, They, something else’ is incredibly inclusive and very informative from a sales/customer service rep point of view.”

“Although being ma’am’ed or sir’ed is typically seen as a form of respect, with trans and gender-non-conforming people, it can often ruin their experience as a customer,” – Chris in Madison

How businesses are getting on board

Major brands have been putting these kinds of ideas into practice. Recently, United Airlines became the first U.S. airline to provide booking options for non-binary flyers. Passengers can now self-identify as ‘Mx’ in addition to Ms. or Mr. They can also designate their gender as X (unspecified) or U (undisclosed), corresponding to what appears on the passenger’s passport. United announced its partnership with The Trevor Project and the Human Rights Campaign; both groups are helping the airline train employees on how to best serve LGBTQ customers, as well as create safe spaces for LGBTQ passengers and employees. “United is excited to share with our customers, whether they identify along the binary of male or female or not, that we are taking the steps to exhibit our care for them while also providing additional employee training to make us even more welcoming for all customers and employees,” said United’s Chief Customer Officer Toby Enqvist in a press release.

Similar to how Facebook’s gender option now operates, since November 2016, Tinder has allowed users to add gender to profiles. You can select man, woman, or more—at which point you’re taken to a dropdown with roughly 40 autofill suggestions. Type in a letter, and many options arise, including two-spirit, non-binary, and gender questioning—but a user can add anything they want for the gender field. Tinder did not reply to requests for comment, but a Time.com piece detailed how Tinder partnered with GLAAD for the effort. In that story, GLAAD’s Nick Adams said that “It’s important for a major company like Tinder, which has tens of millions of users around the world, to send this message that transgender people are welcome on the platform.” 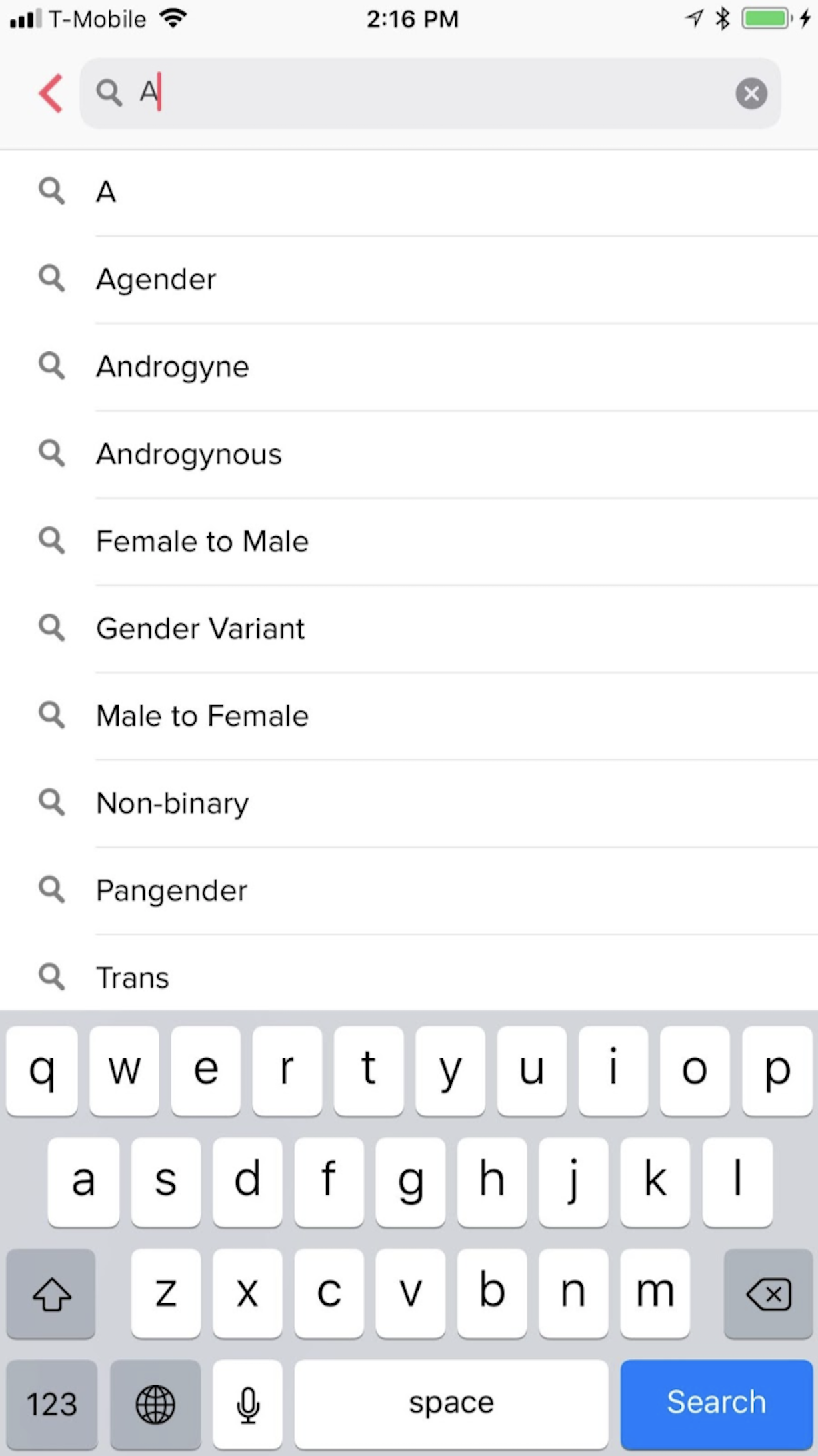 In the workplace, solid resources exist. The National Center for Transgender Equality has compiled a range of good gender-identity nondiscrimination policies for employers and state governments that cover dress codes, work assignments, access to health care. “Understanding how to respect and value trans and gender nonconforming employees [helps companies] create a diverse and supportive and productive workplace,” says Christian.

Ways to help can present themselves unexpectedly, as Chris in Madison experienced during a hospital stay for appendicitis early on in his transition, when his family didn’t yet know that he had started to transition. Enter one very cool nurse. “Her best friend was a trans guy. She kicked my dad out of the room and said, ‘What name and pronouns would you like for me to refer to you as throughout the course of your hospital stay?’” Chris recalls. “Just knowing that she was aware made my experience that much better.”

To further that kind of awareness, the NCTE created an excellent general tip sheet on how to support the trans people in your life. One thing any cis person can do right now: Update your email signature and social media bios with your own pronouns. “It identifies you as allies to the trans and gender-non-conforming population,” says Chris in Madison. “If the only people doing it are trans and gender-non-conforming people, then it’s still an ‘other’ thing. The more that everyone does it, the less it’s about ‘others’ and more just, this is what we do.”

[Read also: Put yourself on the path to empathy]

Why not welcome everyone?

Inclusivity with gendered language isn’t about treating anyone differently, but rather broadening our sense of what everyone means. “I wouldn’t want my customer service to differ from anyone else’s,” says Grantham-Crum. “If I get different service, it’s because I’ve been assumed to be different. I believe customer service should see those it serves as nothing more and nothing less than people.”

Around roughly the same time as the incident at the Indian restaurant, Sara Davis Buechner went shopping for cosmetics at Macy’s, but had a very different experience: “I was very nervous, as I often was at that time, usually asking the poor sales girls to help me out. I honestly didn’t know whom else to consult. My mother certainly wasn’t going to give me any training. At age 36, I needed a mom to teach me that stuff.

“The woman at the Elizabeth Arden counter had her back to me as I approached, and I asked her—not thinking about the quality of my voice—‘Excuse me, Miss, could you give me some help?’

“She answered, ‘Certainly, sir,’ then turned around and saw me, stammered, and said, ‘Oh, I’m so sorry, MISS.’ I told her: ‘It’s no problem. I came into this life as one, and I’m going out as the other, so you got it right both times.’ She laughed and then I did, too, and she gave me a lot of time and great advice about the products that I use to this day.”